CAUTION – Images below of President Trump’s tweets and the responses from other Twitter users are NOT APPROPRIATE. 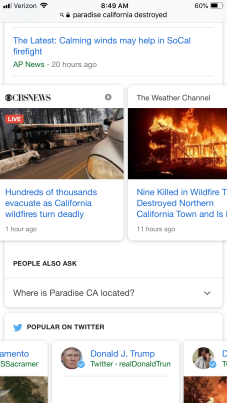 Scrolling through my phone as my traumatized daughter finally sleeps I find news stories and a tweet from the President.

From the data you can see that hundreds of thousands of people have been evacuated.  Their lives thrown completely upside down.  Others have lost their lives.  Homes are gone.  The entire town of Paradise has been “destroyed”.  Schools are gone.

And President Trump, the leader of our nation, has a post about this natural disaster.  So I click on it…. 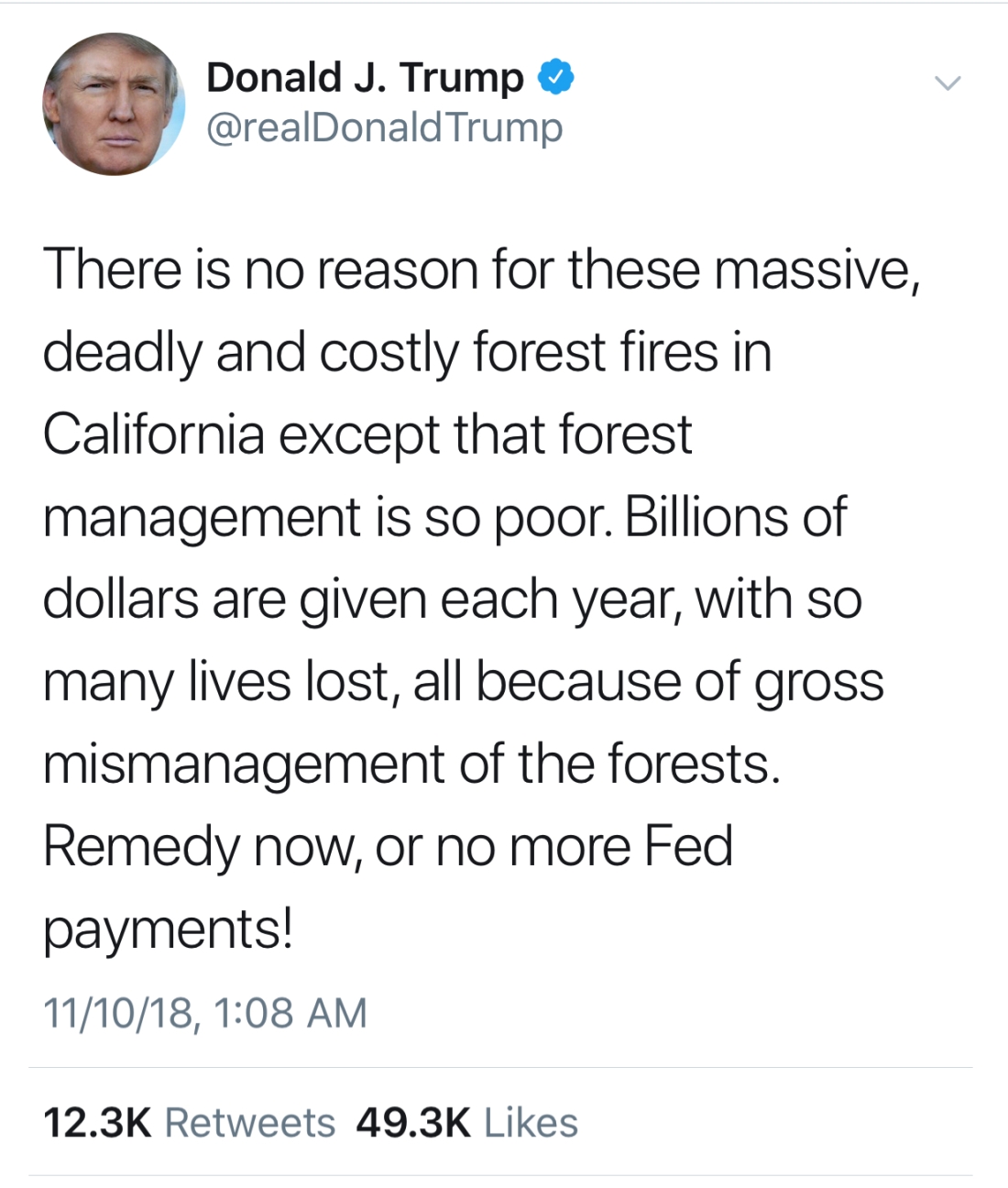 Are there other tweets from the President offering “thoughts and prayers” or expressing concern for the citizens of California where multiple wildfires are also threatening homes and lives?  No.  Are there tweets offering federal assistance to the State of California?  Nope.  Well wishes or words of encouragement to the fire fighters, police, and first responders risking their lives to help others?  None at all.

Addendum:  After the publishing of this blog post the President did post more sensitive tweets and visited the town of Paradise, but he repeatedly referred to it as the town of “Pleasure”.

The President’s twitter stream if full of accusations of voter fraud in Florida, slams on Representative Nancy Pelosi (who is from California where the fires are occurring), slams on Senator Jeff Flake (who is retiring from politics), and taunts towards the President of France where our President is currently visiting.

Underneath the President’s tweet about the fires in California is this interesting reaction:

Exactly.  You sir or ma’am, are spot on.  Inappropriate, but spot on.

And here’s the problem… this thinking and reaction is very dangerous.  As the rage fades and my “vision” returns I take a deep breath and think about these responses.  The President’s reaction.  The hater’s reaction.  My own reaction.  Rage and anger are literally blinding.  And people who are blind are easier to herd.

If you’re a Trump Supporter, you probably saw this post.  Agree with him.  And get angry that your money is being wasted by California and the Federal Government on programs that don’t work.  You’re angry people lost their homes and lives, but you see it as the result of poor government.

If you’re not a Trump Supporter, you probably saw this post.  Disagree with him.  And you get angry because he doesn’t understand that these forest fires and wildfires are happening due to the effects of global warming.  You may be angry, like I am, that he posts something like this and fails to “lead” like so many Presidents did before him.

In my lifetime I’ve seen President Carter address the nation about hostages in Iran.  Ronald Reagan reassured us that the astronauts onboard the Space Shuttle Challenger gave their lives in the name of exploration and progress.  President Bush promised to free the people of Kuwait.  President Clinton shared our pain when we learned about the bombing in Oklahoma City.  Whether it’s natural disasters, horrible accidents, or war, our Presidents have led.

President Trump herds.  He herds us with hate.  Many leaders do.

Get thinking.  Reflect.  Read more, and ask more questions.  Because as soon as you get angry you get blind.  And blind people are easier to control.

I’m proud of you, your strength, and bravery.   I’m so sorry this has happened.  A child your age should never have to experience what you’ve been through and lose all that you’ve lost.

The world is a dangerous place.  It’s also beautiful.  Luckily you’re still here to see this and learn from it.  You are alive and you will rebuild.  The images of what you saw will haunt your life forever and those feelings of terror will wake you many times as your brain heals from this trauma.

When this happens I hope you can take comfort that you are surrounded by people who love you.  You have family and friends who will do everything they can, every single day, to keep you safe.

Michael Hakkarinen is an Instructional Technology Trainer with the Utah Education Network.  He may not be a licensed therapist, but he does have some good ideas on how you can find balance between the constantly connected technology in your life and what you would much rather be doing instead of tapping, scrolling, liking and lurking.